The canton is creating a second campus for the University of St.Gallen in the Platztor area, thereby providing the HSG with the additional space it urgently needs. The architecture competition for the new campus in the city of St.Gallen has now been decided. The jury has awarded first prize to Pascal Flammer of Zurich for his “Building in the park” project. Construction on the large-scale project is expected to begin in 2025.

26 April 2021. The University of St.Gallen urgently needs more space if it is to continue fulfilling its core tasks in teaching and research at a high level of quality. To address that need, a second campus will be built in the Platztor area in the city of St.Gallen. Having concluded the architecture competition, the canton has moved on to the next step: the actual construction project. The approval procedure involving the special land use plan should be initiated in 2023. Once construction begins in 2025, the building is expected to be commissioned in 2029.

A park surrounding the building

“Building in the park,” the winning project by Zurich architect Pascal Flammer, calls for construction of a six-storey building in the Platztor area. With approximately 31,000 square meters of floor space, the new campus will meet the University of St.Gallen’s need for additional space. The winning project will create a lightweight, open impression thanks to large window areas and the use of wood. Public-oriented facilities such as the cafeteria will be oriented towards the city centre. The building will be surrounded by a spacious park, which, like the building, is open to the public. 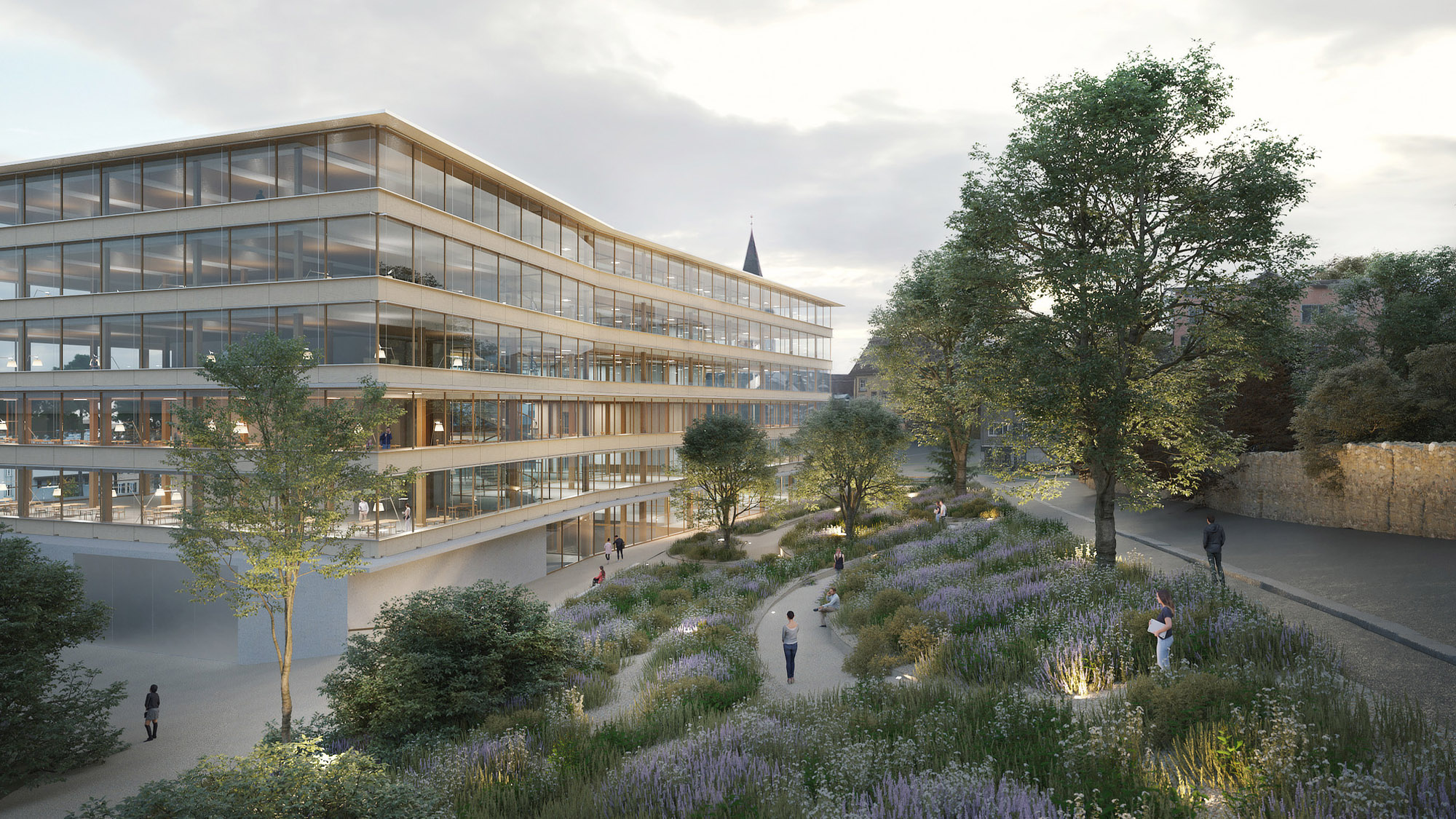 New building Campus Platztor of the University of St.Gallen

A project with many requirements

The building will offer space for around 3,000 students, faculty and employees. Teaching and research will be combined on each of the upper floors so that students and faculty can meet and compare notes. A large auditorium with room for 400 people is planned for the two basement levels. Thanks to the surrounding park, the building shows consideration for the neighbouring district and St. Jakob-Strasse as an important traffic axis. The new building represents a substantial upgrade for the area compared to the current situation.

The canton launched the architecture competition in the fall of 2019 and subsequently received 59 competition entries. None of the projects met with unqualified approval at first, a fact that the jury attributed to the exceptional challenges posed by the task. In 2020 the jury therefore decided that the three most promising submissions should be revised. The three projects were developed much further during revision.

Proposition approved by the public in 2019

Anyone interested in viewing the 59 projects with models and blueprints can do so on the third floor of the main post office in St.Gallen. The exhibition will run from 27 April to 8 May. Opening hours are listed at www.hsgbaut.ch. In view of the current situation, only a limited number of people can occupy the exhibition hall at a time.

Artists perform in the HSG SQUARE

In the new "Artists in Residence" format, artists use the HSG SQUARE as a place for exhibiting and creativity. As its début, it features the Canadian…

In September, the first class of the Bachelor's programme in Computer Science began their studies at the HSG. This makes it possible for students to…