With its IT Education Offensive (ITBO), the Canton of St.Gallen has been promoting digital transformation since 2019 in an attempt to counter the shortage of skilled workers in Eastern Switzerland. In the presence of Federal Councillor Guy Parmelin, the ITBO Summit 2022 looked back on what has been achieved and discussed the next steps.

25 October 2022. Educational institutions at all school levels have been working for three years on forward-looking projects to strengthen the Canton of St.Gallen as an educational and business location. Seven projects with 23 sub-goals are being advanced in five focal areas. For the first time since the start of the education offensive, those involved came together at the ITBO Summit in the SQUARE at the University of St.Gallen (HSG) on Monday, 24 October, to strengthen their networking.

The ITBO Summit was comprised of two parts. First, the Programme Committee, the Advisory Board and the Project Committees exchanged views on cross-organisational cooperation. Then, a conversation with Federal Councillor Guy Parmelin and a panel discussion explored how the momentum of initiatives like the ITBO can be harnessed and strengthened in the long term. In his welcoming address, HSG President Bernhard Ehrenzeller recalled that the ITBO provided the impetus to establish the School of Computer Science at the University of St.Gallen as early as August 2020. In the meantime, the new school has integrated very well into the university and strengthened HSG’s mission.

“Digitalisation affects us all. It is impossible to avoid it,” emphasised Director of Education Stefan Kölliker. The ITBO was created to catapult the entire educational landscape into the digital future, he said. “It deliberately invests not in infrastructure, but in people.” Exciting projects have already emerged from the offensive, such as the Digital Talents Programme, which enables career changers to enter the industry.

Switzerland has some catching up to do

Federal Councillor Guy Parmelin praised the initiative that the Canton of St.Gallen had taken in starting the IT Education Offensive. Only recently, Switzerland was once again named the most innovative country. As far as digitalisation is concerned, however, it is still lagging behind. “We clearly have to do better in this area,” emphasised the Head of the Department of Economic Affairs, Education and Research. Especially because the labour market is changing at a rapid pace due to digitalisation, children, young people and adults need to acquire digital skills in order to keep up in life and at work.

In conversation with the former Tagesschau presenter Franz Fischlin, Guy Parmelin also spoke about the shortage of skilled workers. He said that not only was the IT sector affected, but also sectors such as health care and food service. There is no one-size-fits-all solution. On the one hand, the task is to create new educational paths, but on the other hand, challenges include wage issues and the attractiveness of working conditions. The federal government could create the appropriate framework conditions to overcome the shortage of skilled workers. Beyond that, however, other groups within society need to take the initiative. Especially with digitalisation, which permeates all areas of life, everyone needs to make sure that they are digitally fit. In all their efforts, however, people should not forget that new technologies must always be in the people’s interest, he emphasised in conclusion. 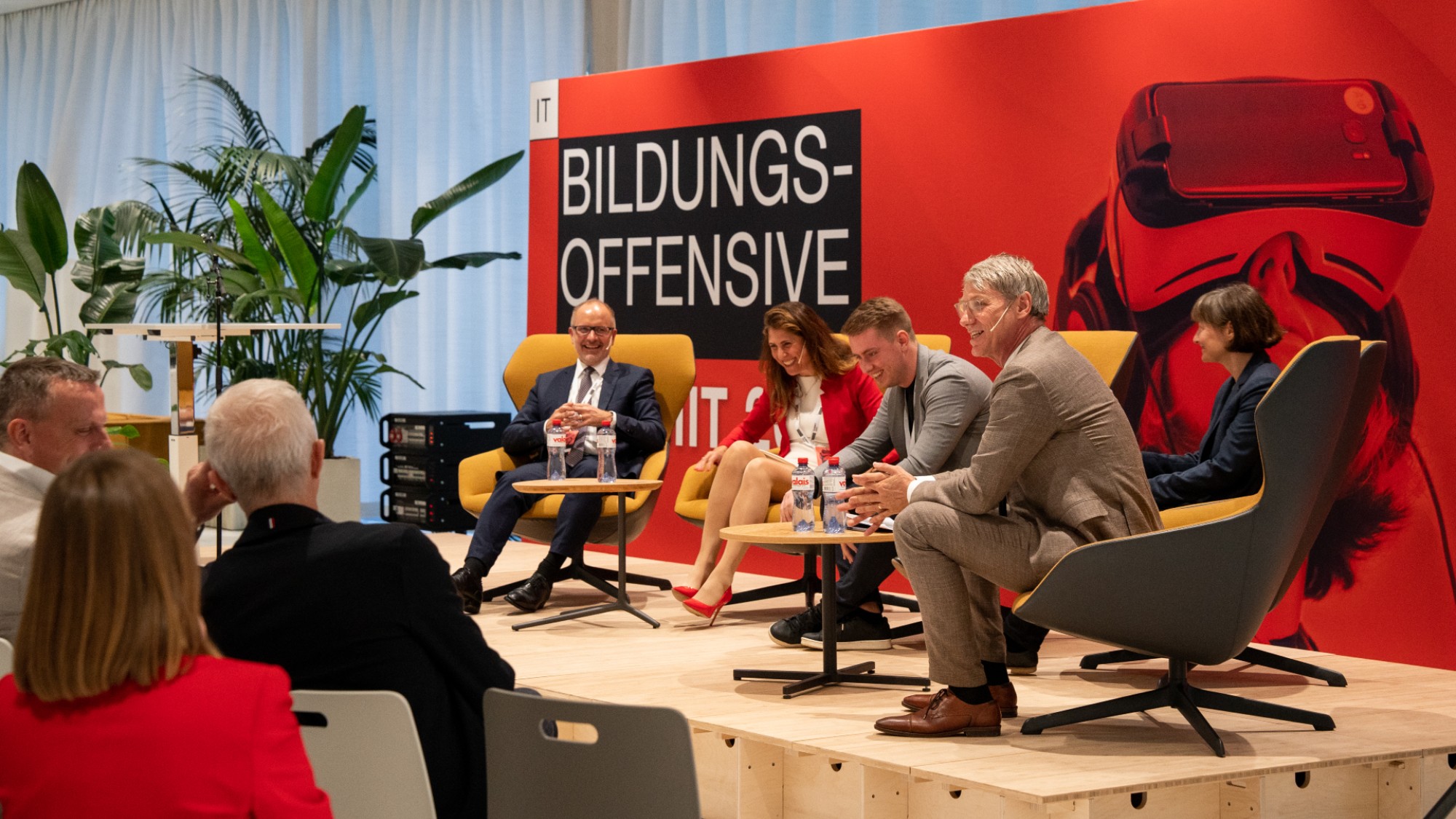 The pace continues to accelerate

The panel discussion focused on the question of what the next steps in the IT Education Offensive should look like. On the panel were Stefan Kölliker, State Councillor and Education Director of St.Gallen, Cornelia Diethelm, expert in digital ethics, Dalith Steiger, expert in artificial intelligence, and HSG student Max Keller, President of Start Global. Stefan Kölliker mentioned that the government had allocated CHF 75 million for the IBTO. Another CHF 15 million came from the business community. “It was not to be expected that so much money would be approved for the project. We therefore feel a strong obligation to look very closely at what the funds are being used for,” he stressed.

HSG student Max Keller suggested that students should be better involved in the discussion. They are the ones who have largely grown up with digitalisation. Dalith Steiger pointed out that several new technologies were currently entering the market, which were accelerating digitalisation at an even faster pace. “We must not lose any more time, and we must move forward.” Cornelia Diethelm pleaded for education not to focus solely on economisation, but also on the humanist side. “People need social skills in addition to digital skills in order to survive in life.”