In a way, the EcoOst St.Gallen Symposium of 17 May is the sequel to the St.Gallen Symposium. Accordingly, it also focused on the motto “Trust Matters”. The University of St.Gallen (HSG) as an event partner was prominently represented with several guests.

18 May 2021. Markus Bänziger, Director of the St.Gallen-Appenzell Chamber of Industry and Commerce welcomed the 50 guests. The goal of the event was to take the topics discussed at the St.Gallen Symposium “into the region”. Fortunately, the current prescriptions of the Federal Council made a physical meeting possible, leastwise to this extent. However, most participants joined online. 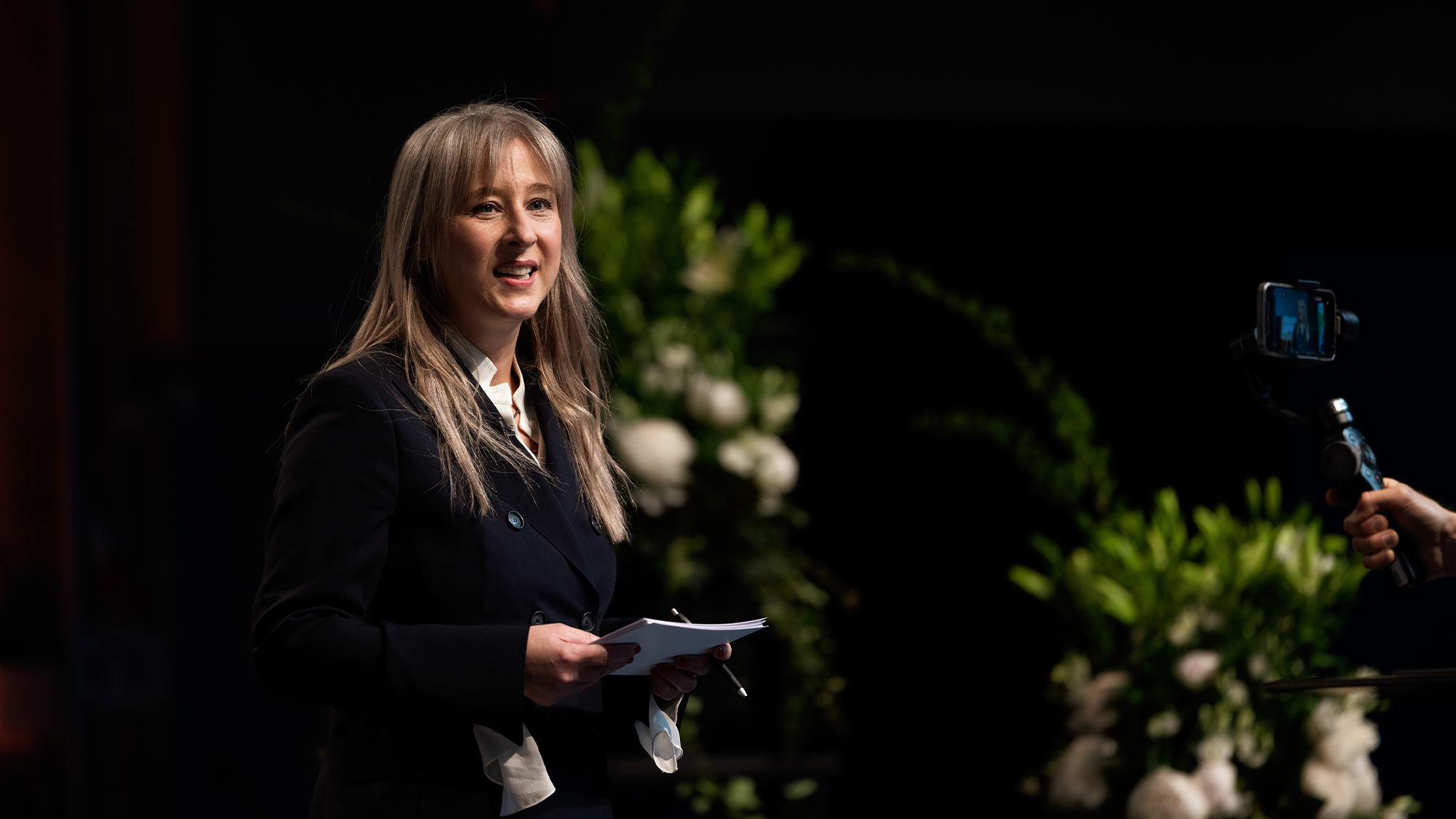 Odilia Hiller, regional editor of the St.Galler Tagblatt, moderated the evening with aplomb.

In her keynote speech, Federal Councillor Simonetta Sommaruga compared trust and mistrust to an “old married couple”. Our political system was characterised by healthy scepticism, and the fact that many actors can become involved created trust. Thus she also described the relationship between the government and the population during the pandemic as being “characterised by mutual trust”. The population was confident that the government would not take any unnecessary measures, and the government, in turn, relied on the population’s best possible compliance with the directives. Trust was a “basic element” in politics, but had to be repeatedly earned. Furthermore, the Federal Councillor made a case for the adoption of the CO2 bill, which she described as a “good law”, in the coming ballot. 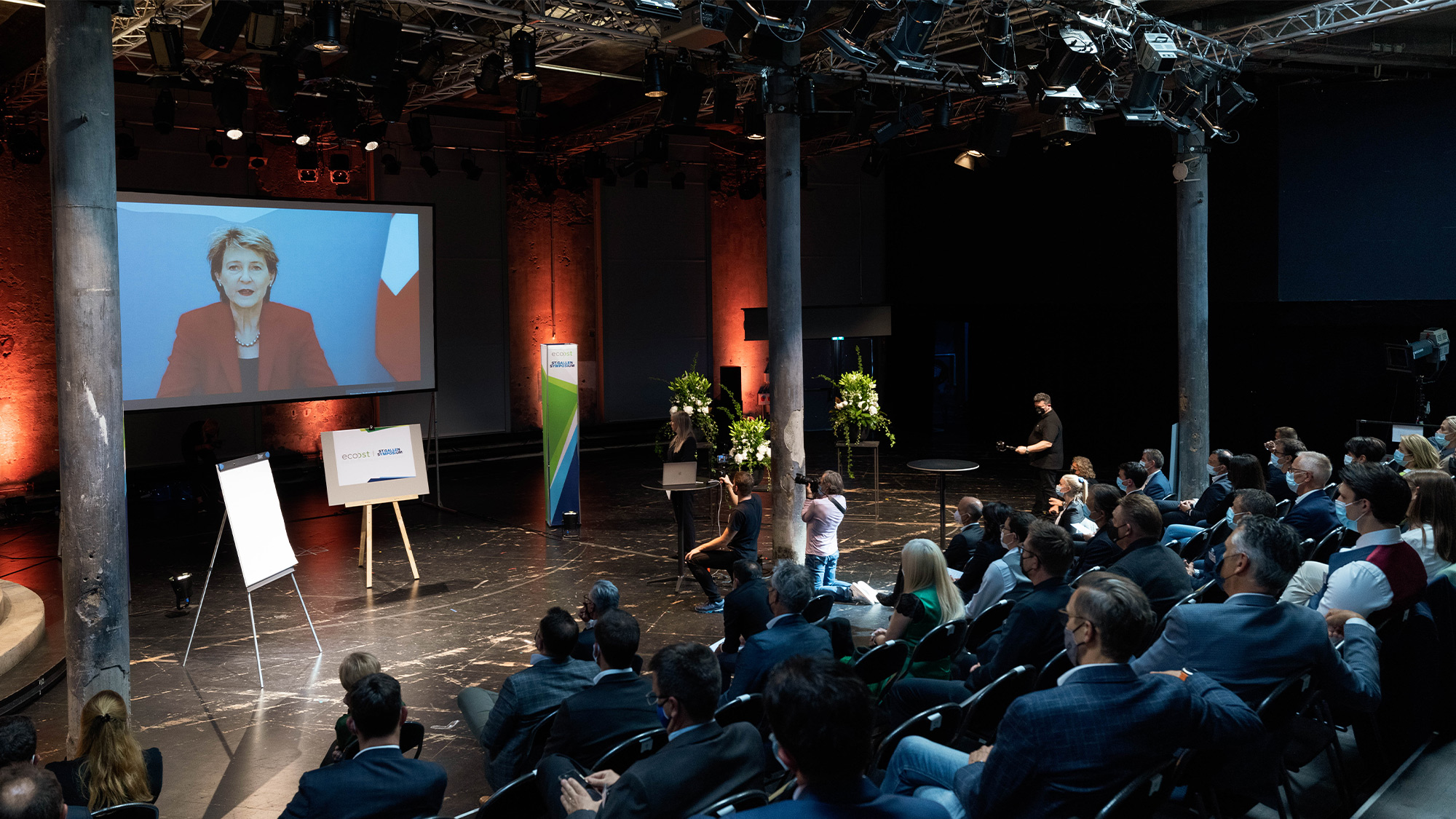 Was linked up from Berne: Simonetta Sommaruga.

In his review of the 50th St.Gallen Symposium, Dr. Alexander Fust, KMU-HSG, enumerated the topics that had been discussed, such as trust in companies, politics, science, the media and technology. To master challenges such as climate change and digitalisation, an intergenerational dialogue of the kind practised at the Symposium was required. This fostered mutual understanding, which in turn created trust.

Three Eastern Swiss entrepreneurs in tandem with students of the HSG presented their prepared propositions about trust. Peter Breitenmoser, CEO of Schmolz + Bickenbach Stahlcenter AG, and Linda Blöchlinger spoke about trust during the pandemic, which they described as “indispensable”. For firms, it was particularly trust in those employees who were working from home. “But you must invest in trust in order to be able to rely on it in a crisis,” said Peter Breitenmoser. Ivo Dietsche, Head of the Coop’s Eastern Switzerland-Ticino Region, and Dominik Lanter presented their proposition under the heading of “Agility requires stability”. Starting out from the challenge for firms to maintain their competitiveness in uncertain times, they presented three features each of agility and stability. They demonstrated that they were opposites that are mutually contingent on each other.  Dominik Lanter concluded the presentation with an aptly chosen quotation from Goethe: “There are two things children should get from their parents: roots and wings.” By children, he presumably meant employees – and by parents, employers. 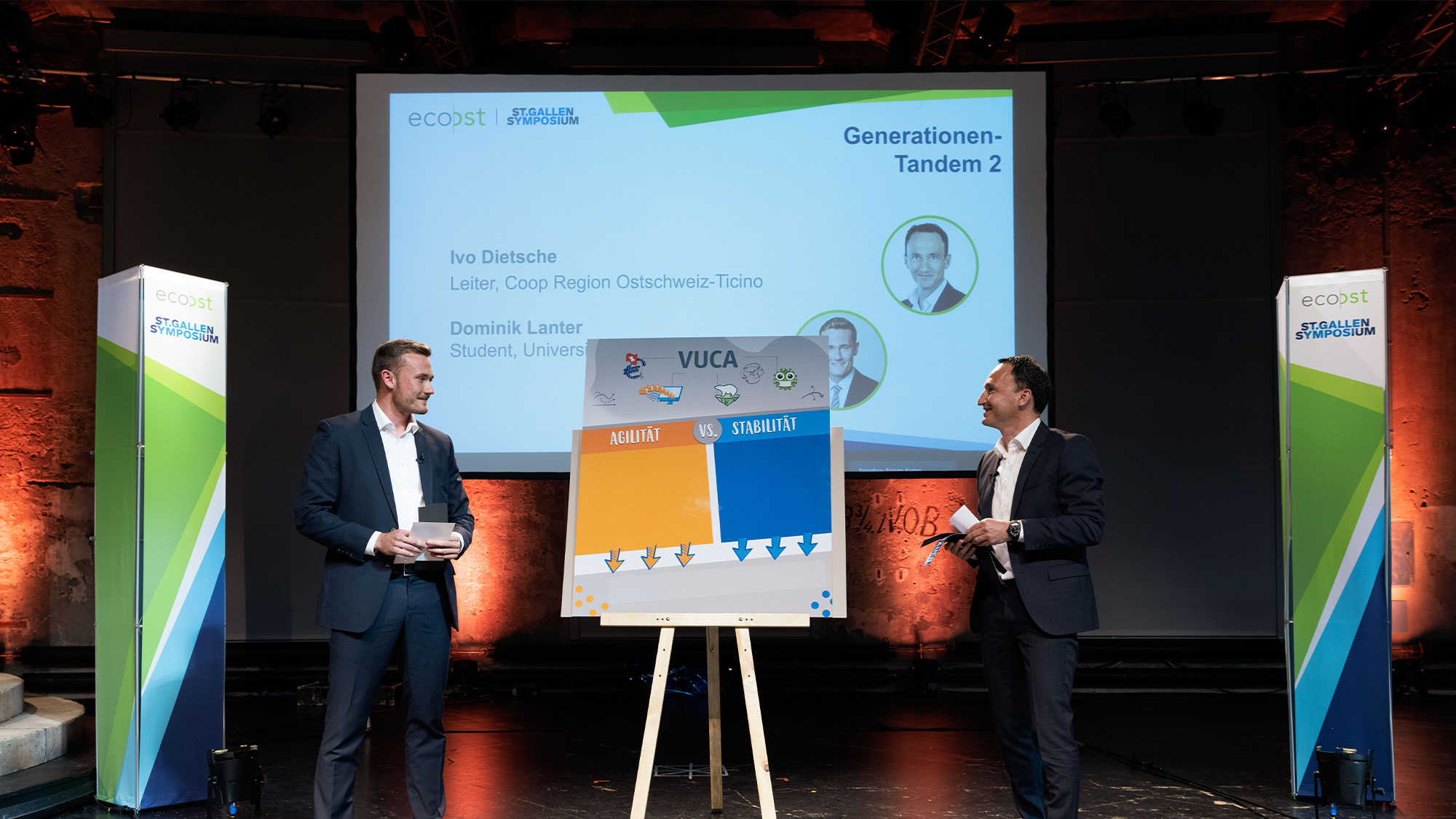 Agility and stability: not a contradiction, as Ivo Dietsche and Dominik Lanter demonstrated.

Caroline Studer, CEO of M. Opitz & Co. AG, and Joel Mäder discussed their proposition entitled “Exemplary action creates trust”, an appeal to executives, whose behaviour was regarded as representative of the entire organisation by employees. They provided practical tips about how executives create trust – for instance if they do not always turn up last for meetings.

Trust instead of control?

The President of the Federal Tribunal, Martha Niquille,, was pleased that the judiciary had not been an issue so far. This was probably the result of the fact that it enjoyed unbroken trust, which was not accidental: the judiciary had not been the focus during the pandemic. But now the pandemic had raised new legal questions, which may well occupy the cantonal courts now and the Federal Tribunal later. 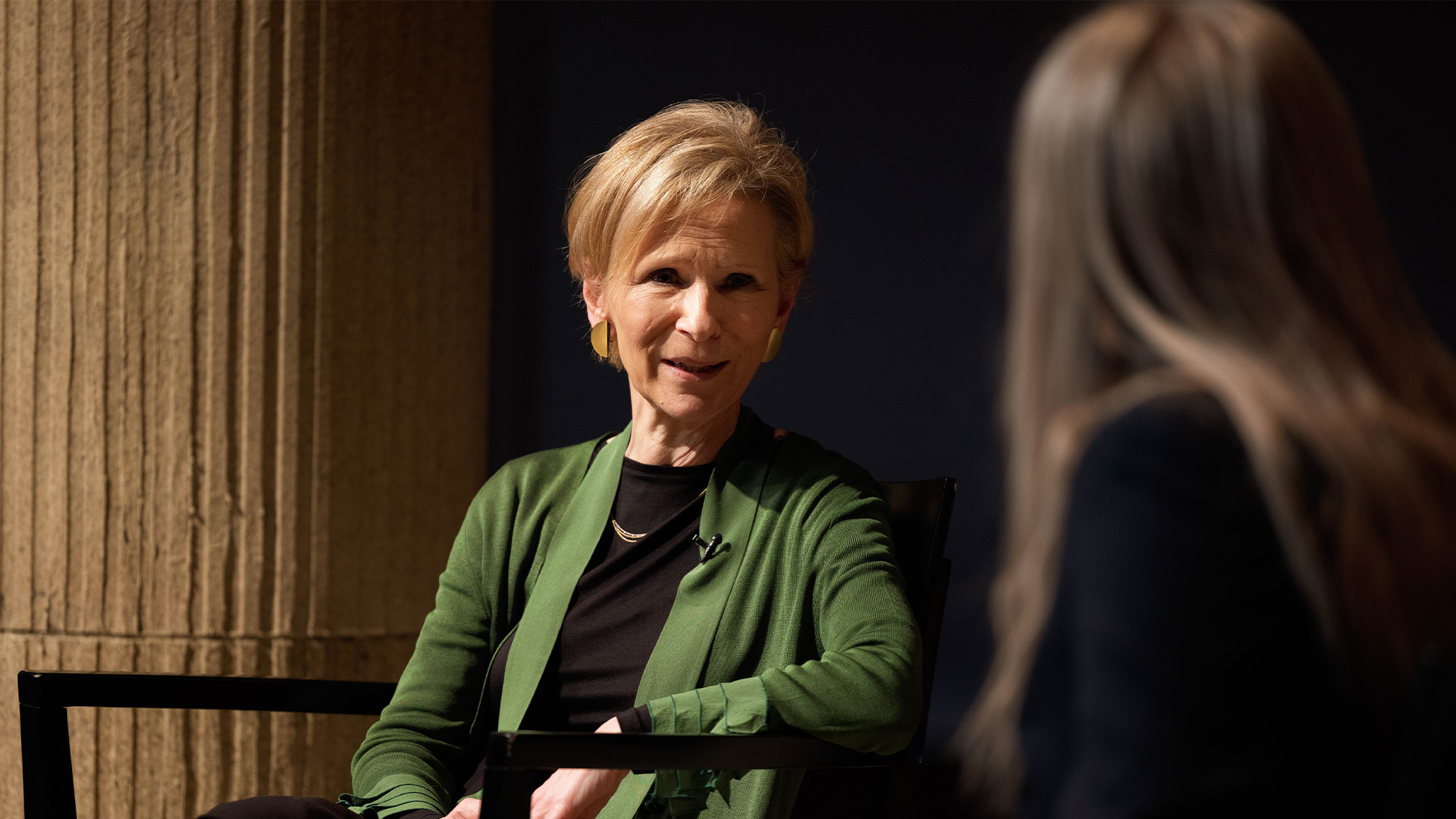 HSG alumna Martha Niquille is the first woman to head the Federal Tribunal.

Tim Habermann, OC member of the St.Gallen Symposium, emphasised the increasing significance of intergenerational dialogue. He demanded that the young generation should be involved in decision-making to a greater extent. However, they should also turn this trust to account and make use of their voice. Ivo Dietsche admitted that they had been surprised by the speed and dynamism of the pandemic at the Coop. “But we were quickly able to create trust and show that we could safeguard the supply.” It was impressive what employees had achieved. “I don’t think this would have been possible without them trusting their employer.” Dr. Isabel Ebert from the Institute for Business Ethics is conducting research into how the pandemic is changing work. The digitalisation process had received an immense boost, she said, and togetherness at the workplace was changing. Whereas some companies managed the process well, there was latent mistrust in others, in keeping with the mantra “Trust is good, control is better.” Studies revealed, however, that performance decreased when employees felt that they were under observation. Added to this, it was difficult to gather reliable data about productivity. It was part of the HSG’s educational mission to show future executives how they could configure digitalisation responsibly. The panel guests agreed that the working world would be more hybrid after the pandemic as well. Tim Habermann welcomed a higher degree of flexibility from the students’ perspective, but would not want to miss personal exchange on the campus. To conclude, Beat Ulrich, CEO of the St.Gallen Symposium, expressed his thanks to all the participants and partners, particularly the HSG, which has hosted the Symposium for 50 years.

The security of cyberspace has become increasingly important for the smooth functioning of our digitally networked society, and not just since the…